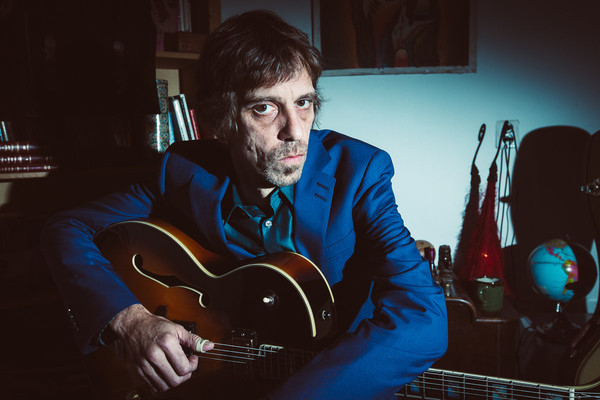 Justin Lavash (born London 1968) has been based in Prague for fifteen years and during that time has established himself as a must-see act on the Czech music scene and abroad. His music crosses borders - somewhere between blues, folk and jazz. His phenomenal guitar playing has left many audiences wondering how so much polyphony can be made by one man on one instrument. Lavash identifies himself as a fingerstyle guitarist, following in the footsteps of British folk guitar gurus like Richard Thompson or John Martyn, but he is of a younger generation and traces of New Wave and even dance culture can be found in his music. Prior to living in the Czech Republic Lavash worked as a guitarist in south London's jazz scene in the 90s and later cabaret scene, both as a guitarist and a transcriber.
His soulful voice entices the listener to sit and absorb the beautiful songs this artist has penned. In fact his skills as a performer are matched with his talents as a songwriter. He has written or co-written and performed songs by some of the Czech Republic's most repected artists - Lenka Dusilova ("Brother" on Baromantika and "Mayday" on V hodine smrtii), Michal Horacek ("Dizzy and stranded in Prague" from Cesky Kalendar), Sunflower Caravan ("A little bit more"), Monika Naceva ("Milostny Slabiky") and he has also worked with Raduza (Marathon), DG307 and Vladimir Merta. Two of his songs ("Brother" and " Dizzy and stranded in Prague" were on releases which received prizes in the Czech gramophone industry's Andel awards in 2012 and 2013.
His 2015 studio album, Changing of Tides (Tranzistor, May 2015) shows Lavash flexing some songwriting muscle, and moves through genres like blues, country, jazz, funk and soul with breathtaking ease. His 2016 release Programmed saw an audacious fusion of bottleneck blues and electronica styles and earned top marks in Czechia’s prestigious Reflex magazine as well as extensive airplay on Prague’s Radio1 among others. Lavash continues to tour extensively through Europe, not least in the Czech Republic. His act has earned a reputation as one of the best to be seen on the scene, and this has been captured in two live albums, recorded in his adopted hometown - Live in Prague 2015 and Live in Prague 2 (2018).
Recent health problems forced a move from his beloved Prague to Teplice, a town that he came to love from his first concerts in the famous summer gardens back in 2011.