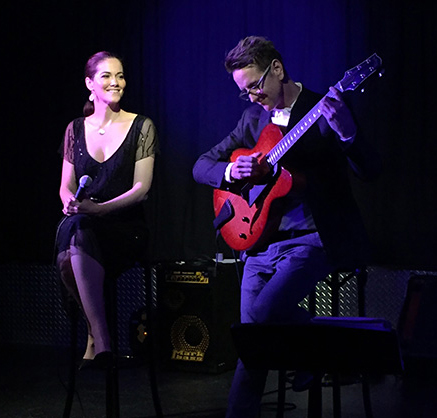 Australian jazz duo, vocalist Hetty Kate and guitarist James Sherlock have toured together for over a decade. Between them they have released 18 albums, and performed on stages large and small, from New Zealand to New York. With their warm and masterful approach to the classics and curiosities of the Great American Songbook it is easy to compare them to the great voice and guitar duos of the past, Ella Fitzgerald and Joe Pass or Julie London and Les Paul. But James and Hetty are always sure to play in a way that is unique to their own sound and story.

Guitarist James Sherlock has a celebrated career in Australia, winning the Ike Isaacs Jazz Guitar Award and opening for George Benson at the Montreux Jazz Festival in Switzerland. A first call Australian sideman to international touring artists such as Sheila Jordan, Cyrille Aimee, Jeff "Tain" Watts and many others, James is both an acclaimed accompanist and lead guitarist.

Vocalist Hetty Kate has been based in France for the past five years and first sang in Dresden in 2011. With a light, relaxed yet masterful approach to music, her clear voice is often described as sounding like a young Ella Fitzgerald or Blossom Dearie. Hetty has toured internationally for over a decade, released nine albums and has a large repertoire of treasures from the swing and bebop eras of jazz.

For this intimate concert, James and Hetty will play favorites from the American Songbook and popular tunes from Hetty's albums. Join us for an intimate summer evening of swinging jazz, beautiful music and stories.